Showing posts with the label Monuments. Castles
Show all 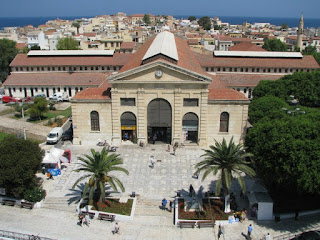 Chania Municipal Market was built in 1913 as vegetable, fish and meat market for the city of Chania.  It officially opened to the public 3 days after the union of the island of Crete with Greece. The architect, Konstantinos Drandakis, built the market where the mortar of the southern venetian walls were. This is evident by the difference of height between the north and south entrance to the building. During the Nazi occupation, most of the marketplace was used as a storage space for the German army. Today, although there are some shops selling local products, there are also many souvenir stores.  Chania Municipal Market is considered today as one of the most important tourist attractions. Entrance is free.
Location: Πλ. Αγοράς 69, Χανιά 731 32, Ελλάδα
Read more

During the end of the Venetian occupation in Crete, the expansion of the Ottoman Turks led the Venetians to the fortification of Crete by fortresses. The fort is still known today by its Turkish name, Firca (Firka = barracks) and was built in order to protect the entrance of the harbour.  The positions of the cannons on the northern side of the fortress, which looks at the entrance of the harbor, are so far visible on the outer side of the wall. A thick chain from Firca to the base of the light-house closed the harbour in case of siege. The fort was the headquarters of the Military Commander of the city. The inside area was divided into barracks and ammunition warehouses. The buildings of the west wing have two-floors with dome covered rooms. Over the door of the first floor there is the following inscription : “ALOYSIUS BRAGADEUS PROVISOR CYDONIAE M. DCXX”. In the centre of the court, there is a large water reservoir, where the water running from the roofs was collected. I
Read more
More posts